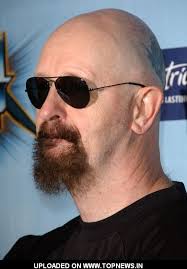 Darryl Smyers of theDallas Observer recently conducted an interview with singerRob Halford of British heavy metal legendsJUDAS PRIEST. A couple of excerpts from the chat follow below

Dallas Observer: 1980’s “British Steel” was a real turning point for the band, especially in America. What about that album appealed specifically to the American audience?

Halford: Well, it was 1980 and it was the start of one of the greatest decades of heavy metal music. Everything changed then. If you look at rock and roll, the history of rock and roll, the beginning of the MTV decade, this was a very special time. At that point, things were just breaking big for Judas Priest. We went into the studio with a handful of songs. We didn’t have a lot of material. The band had developed a special bond after working on the previous records. We were red hot. We worked with a great producer, Tom Allom, who really pushed us. He wanted us to keep things simple and direct. He wanted us to be very straight forward with our arrangements. That’s how those riffs on “Breaking The Law” and “Living After Midnight” came about. When you have a song that is compact and tight and has a melody, than radio wants it. That’s what happened with “Living After Midnight” becoming so successful in America. That is still one of the seminal, rock and roll party songs. When we crank that out towards the end of the show, the crowds go crazy.

Dallas Observer: How scary was the motorcycle accident you had on stage in Toronto in 1991?

Halford: These things happen on stage. We’re not the first rock and roll band to have an accident on stage. That’s just the way it worked out that night. I came out on my Harley and this drum riser got in my way. I banged into it. It was a heavy metal impact and I was thrown off the bike. We were playing “Hell Bent For Leather”. You get up and shake it off and you carry on. That happened again in South America [in September of this year], I think. [See video below] I was hurdled across the stage. I went for a sprawl.

Dallas Observer: Was there any pressure from a record label or a management agency on you not to reveal your homosexuality in 1998?

Halford: No, it was a personal decision. I’ve always respected the fact that my band and my management and my label kept their hands off that very private affair. When any of us steps forward and makes such an announcement, it’s a very personal choice. Some of us choose to live a life under the radar for different reasons. For me, it was a very empowering thing to set myself free. The biggest thrill was the acceptance of my fans more than anything else. The guys in the band knew. The families knew. The general heavy metal fan did not know. I didn’t know how the fans would react. But you have to get your own house in order. Then, you can look at things around you more clearly.